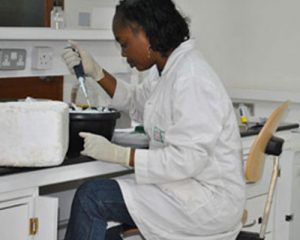 Molecular Breeding or Marker assisted breeding (MAB) is the process of using the results of DNA tests to assist in the selection of individuals to become the parents in the next generation of a genetic improvement program.

The choice among various methods of MAB depends on the complexity of the trait and a prior knowledge on the gene (s) or segments of chromosomes (known as quantitative trait loci (QTL). Molecular markers facilitate conventional breeding, improve selection efficiency, reduce cost for developing new varieties, and/or quality control (ensuring line purity and genetic identity).

In IITA, in collaboration with partners, various schemes of MB are being employed to accelerate variety development in cassava, maize, and cowpea whereas; genomic resource development or preparation is underway for yam, banana, and soybean. 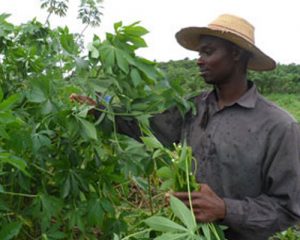 Until now, cassava breeding has been a lengthy process due to the crops biology characterized by long growth cycle, difficulty in making crosses and low seed set per pollination.

Moreover, it takes several years to produce large sufficient quantities of planting materials for multi-locational yield trials, mainly due to the low multiplication rate. We have adapted a new breeding strategy to speed up the breeding process by reducing the need to carry out extensive phenotypic evaluation before making parental selection.

We use high-density SNP markers in conjunction with statistical modeling to implement “genomic selection” and predict cassava performance, thereby shortening the breeding cycle from six to one year.

At IITA, a multidisciplinary team including breeders and molecular geneticists [working from the Bioscience Centre] collaborate to execute the project. Following recombination among elite parents, we use modern high-throughput DNA extraction system to isolate DNA from thousands of seedlings in a matter of weeks, thus allowing for ample time for genotyping-by-sequencing and estimation of breeding values in time to establish the next crossing block.

This project is implemented in partnership with Cornell University and the National Breeding Programs of Nigeria and Uganda. More information can be found on the project website (www.nextgencassava.org) 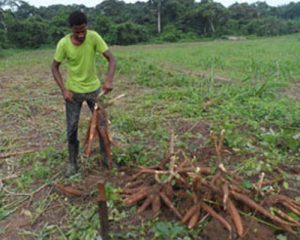 High-density genetic maps are essential genomic tools that provide a framework for addressing several biological research questions such as localizing Mendelian and quantitative trait loci, and assisting in evolutionary and comparative genomics. Another important use of high-density genetic maps is in the assembly of draft genome sequence derived from whole genome shotgun sequencing.

As part of the “Cassava Genetic Map Consortium” – a collaboration between IITA, the University of California – Berkeley and US Department of Energy-Joint Genome Institute, we are in the process of developing dense genetic maps from several mapping populations that are genotyped-by-sequencing. The goal of this consortium is to provide the cassava breeding community with a dense consensus genetic map for cassava by combining high-density genotyping through the GBS method and a collection of different mapping populations.

Such a map will anchor much of the genome sequence and thus will enhance the value of the reference cassava genome to the whole community.

Cassava has tremendous diversity of traits ranging from resistance to pests and diseases to yield and yield components, and needless to mention enormous morphological variability. Most of the traits that are of high priority to breeders and the farmers that they serve are available in the crop’s genepool but cumbersome genotyping systems that often use anonymous markers and sparse genetic maps. These limitations has been a hurdle to the understanding of the genetic architecture of these traits, thereby limiting the ability to unlock the crop’s potential through more targeted breeding strategy. The advance in next generation sequencing-based genotyping has led to a paradigm shift. It is now possible to rapidly discover and generate thousands of SNP markers from a large number of samples in parallel, using several variants of the reduced-representation library (RRL) sequencing, including the increasingly popular genotyping-by-sequencing (GBS) that was developed by scientists from Cornell University. This, alongside the reference genome of cassava has set the stage for rapid advances in genetic studies of the crop.

Together with the Cassava Breeding Unit, we have developed several bi-parental mapping populations using parents with contrasting trait expression. The highly heterozygous nature of most parents and the clonal mating system of cassava permits us to generate and fix recombination in the F1 stage, without the need to develop inbred through several cycles of selfing – as is the case with seed-propagated crops.

Using the high-density SNPs derived from GBS, we look forward to map the loci underlying all heritable and segregating traits at fairly high resolution. Bringing together the dense genetic map, QTL mapping results and the reference genome will facilitate identification of the genes responsible.

Traditionally, QTL mapping has been carried out using mapping populations derived from controlled crosses between two parents. The availability of high-density markers from next-generation sequencing technologies has allowed the exploitation of existing linkage disequilibrium in genomes to find markers associated with QTLs of interest in unrelated germplasm collection. We are currently implementing this approach, referred to as genome-wide association study to map multiple QTLs associated with a number of important breeding traits in cassava. For this we use historical phenotypic data collected during routine field evaluation and large number of SNP markers derived from GBS, and carry out mixed-linear-model analysis to account for population structure while finding significant marker-trait associations.

Understanding germplasm variability is the key to better conservation and utilization of the same through breeding. Traditionally, we have relied on morphological markers to assess this variation. In the last decade or so, use of molecular markers have been adopted to provide a picture of the genetic stricture, but these studies faced challenges such as limited by some deficiencies such as the use of anonymous marker systems like RAPDs and AFLPs.

We now use GBS-derived SNPs to characterize the genetic relationships and population structure of breeding collections and landraces, in order to helps with more targeted use of germplasm diversity. In some instances, the fingerprinting of the germplasm is helping to uncover the long breeding history and sometimes even reveals the ancestral parents i.e. founders of the breeding collection